Ever wonder how the Internet goes from one point of the world all the way across to the other side? This article explains.

How is the Internet shared between continents?

Answer: Via submarine communications transatlantic cable, a cable laid on the sea bed between land-based stations to carry telecommunication signals across stretches of ocean.  The cable is used for various sorts of telecom traffic, including the Internet.

How does the Internet get across the ocean?

Most of what you see and find on the internet travels to you from an underwater cable.  99{ad6ec37a2bd3ecfa3332b96b9ac48dbf74f925fa7e3098eb9d9871fb3d85bcba} of all international data is transferred through cables stretching across the floor of the world’s oceans.

Satellites orbiting the planet also help to supplement communications, relaying signals over long distances or as a backup in the event of communications failure.  Cable is preferred over satellite due to the much lower latency and higher bandwidth it achieves.

How data is transmitted and received over the Internet?

Data transmission over the Internet is transmitted by TCP/IP protocols in “packets”. The number of packets depends on the size of the data. The larger the file, the more packets needed to transmit the file.

Each packet is like an envelope sent by postal mail, with the actual data, part of the original file, inside the envelope.  Outside, we have information that will allow TCP/IP to process the packet which extracts and merges the inside data with the data from the other packets from the same file, in the correct order, in order to rebuild the file from its packets.  Also, check out this book on How the Internet Works.

Materials of the first submarine cable

You can actually find some pieces of the transatlantic cable and other historical keepsakes for purchase here: https://ebay.to/2wvybcB

Here is a rare video on workers laying underwater cable:

Modern cables use optical fiber technology to carry digital payloads, which carry telephone, Internet and private data traffic. They are typically 69 millimetres (2.7 in) in diameter and weigh around 10 kilograms per metre (7 lb/ft), although thinner and lighter cables are used for deep-water sections.

As of 2010, submarine cables link all the world’s continents except Antarctica.  More on Wikipedia

Maps of the Internet’s Undersea World 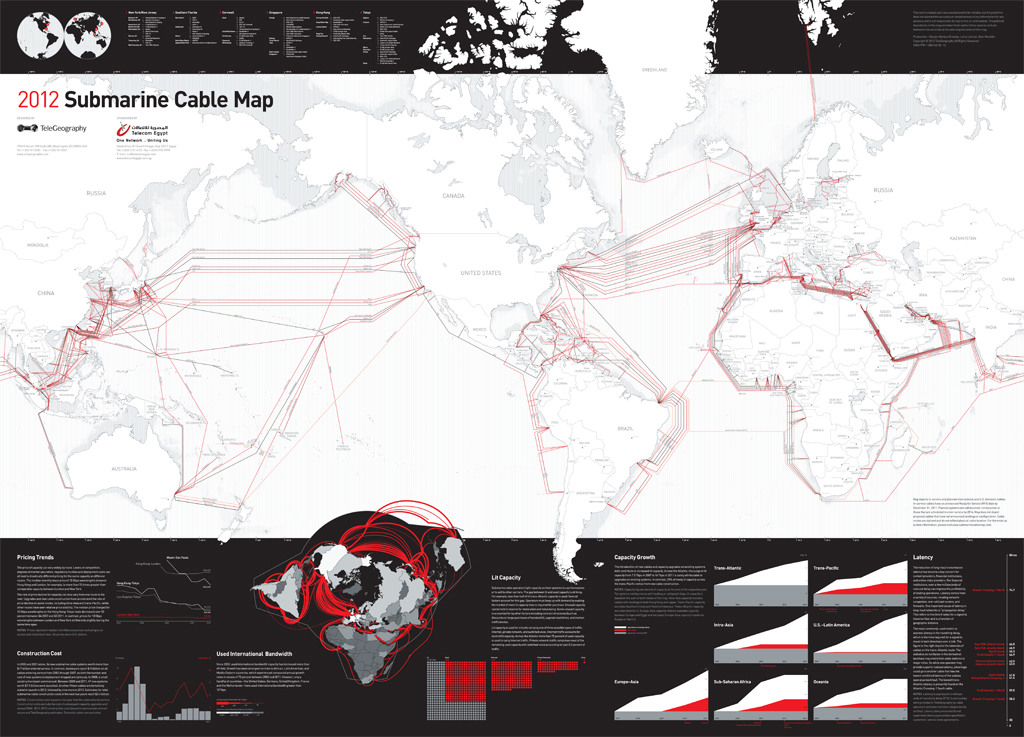 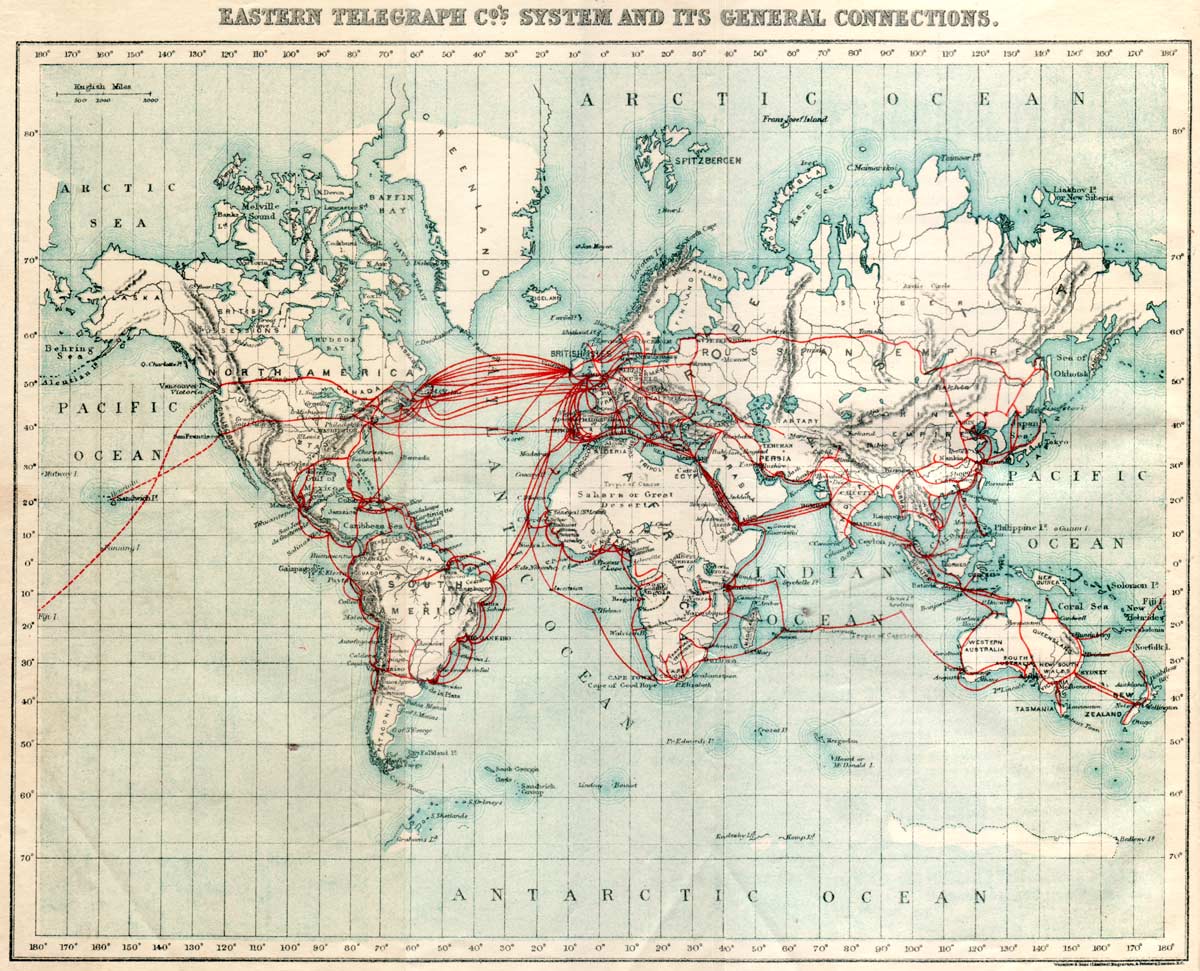 A cable layer or cable ship is a deep-sea vessel designed and used to lay underwater cables for telecommunications, electric power transmission, or other purposes. Cable ships are distinguished by large cable sheaves for guiding cable over bow or stern or both. 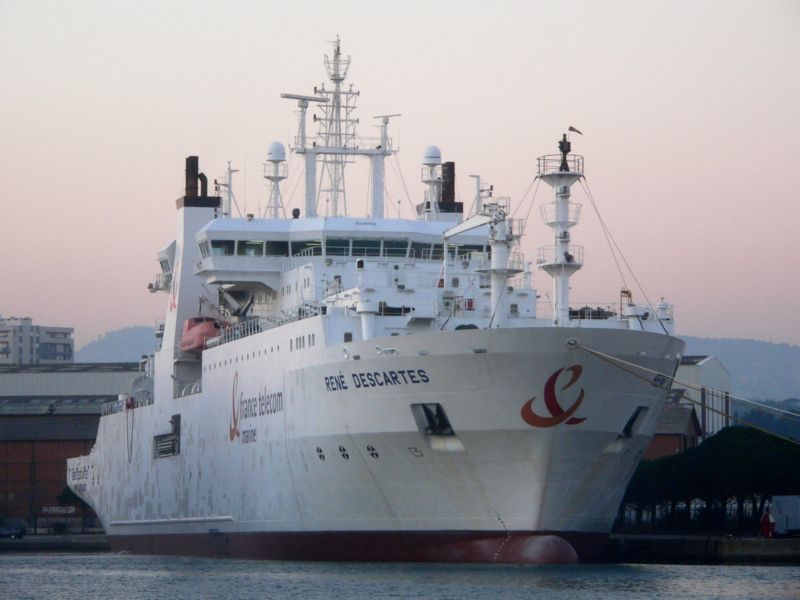 Here is a cable ship in action: 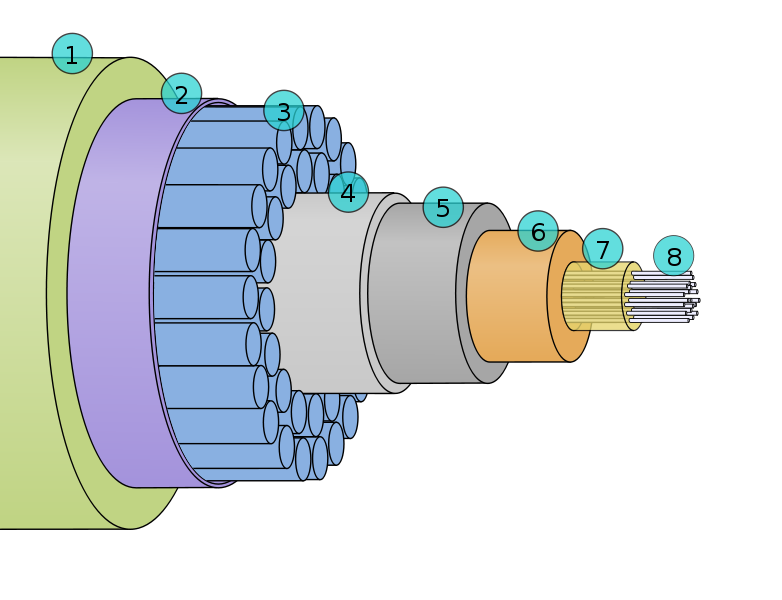 Google’s ‘Faster’ cable is one of a number of undersea cables that connect the world and form a backbone for the internet. The first cable laid across the Atlantic, which was used for telegram communications, was put in place back in 1906.

It features a “6-fibre-pair cable and optical transmission technologies” and is based at two locations in Japan – Shima, and Chikura – with connections in the US extending the system to hubs on the West Coast of the US.

“This cable is the first of its kind, with multiple colors (100) of light transmitted over various frequencies,” Hölzle said in a Google Plus post

“Every ~60km a repeater re-energizes the light as it travels over 9,000km across the ocean floor”.

Check out these books on Submarine Cable Repair.  Submarine cables are very reliable, however, there are occasions when a repair to a cable becomes necessary. Cable faults are caused by many events, both man-made and natural. In water depths greater than 1,000 metres faults are almost always caused by natural events such as underwater seismic activity, underwater landslides, current abrasion, etc. In water depths less than 200 meters, faults are nearly always caused by man-made activities such as fishing and anchoring.

Here’s a video on what it takes to repair a submarine cable:

Interested in a piece of Internet history?  Check out these submarine cable keepsakes: https://ebay.to/2wvybcB

Have any more interesting information to share?  Please leave in the comments section below.

How to install Windows Subsystem for Linux in Windows 11

Windows has had some level of support for running Linux since 2016 when the Windows 10 Anniversary Update came out. It was a pain in the butt to get working at that time though, but with the second version of the Windows Subsystem for Linux in 2019, things became much more user-friendly. Now that Windows […]

Listen to Audio Hey, if you are starting and you are worried about getting a dope website but in a budget… well, no one ever said you could not have a fantastic website at reasonable rates. The website doesn’t have to cost a lot if you are smart. Money is always a crunch for startups; […]

But Descartes was fallacious; they are but two faces of an clever, artistic, self-organizing, learning, trial and error, interactive, participatory, evolving universe. physical sciences reviews impact factor Quite a few followers Of avatar the last airbender hunt internet with the sturdy wishes to download Avatar: The Last Airbender from entertainment websites. Petrescu, RV., Aversa, R., […]