The SuperPort 4 is a great addition

Includes a USB-A to USB-C converter

Takes forever to charge without SuperPort 4

No clear way to update firmware

I don’t know about you, but between scrolling Instagram, Twitter, TikTok, and all the other mindless apps while I do my utmost to avoid actual productivity, I usually find my phone needs a little extra juice later in the afternoon. If you’re not near a socket though, that can lead to a minor panic.

What if you’re on the way home and your phone runs out of power? How will you cope for an hour without Facebook? Or the occasional important email? That’s why power banks are always a handy thing to have around.

Zendure is becoming a bit of a specialist in this market, and have recently released the SuperTank Pro, which is what we’re reviewing today.

First off, the build quality is superb. The palm-sized powerhouse has a durable aluminum alloy body and is reassuringly heavy. Zendure claims it’s to protect the internal components, and I wouldn’t put any doubt in this assertion. I’m not going to go throwing it off a balcony to test it, obviously, but after a few weeks of testing (complete with several drops off a sofa), it still doesn’t have a single scratch or dent.

An OLED screen gives full visibility of the power left in the tank, as well as the current wattage flowing to or from each of the four USB-C ports. It all looks and feels like a premium product in every aspect.

It comes with a sleek black zip case, which holds the SuperTank Pro itself, along with your cables, safe and secure when traveling. You won’t need to worry about it taking damage or putting dents in your precious laptop, Macbook, or digital camera as it rattles around in your bag.

But is it any good?

While it’s nice to know that it looks good, visuals obviously aren’t the be-all and end-all. The performance is where it counts. Luckily, the SuperTank Pro also manages to cover this base, too. To put it through its paces, I filled its 26,800mAh reserves and used it exclusively on my Samsung S20. Taking just over an hour to charge when used with Port 2 (we’ll get to the ports in a second), I managed to get four days straight before I was restricted to a plug socket again.

So – the choice of ports. All are USB-C, with ports 1 and 2 hitting a maximum output of 100W, while ports 3 and 4 can hit up to 18W each. A maximum output of 138W at any time means you can charge up to 4 things at once, but the speeds are reduced with each device you add. 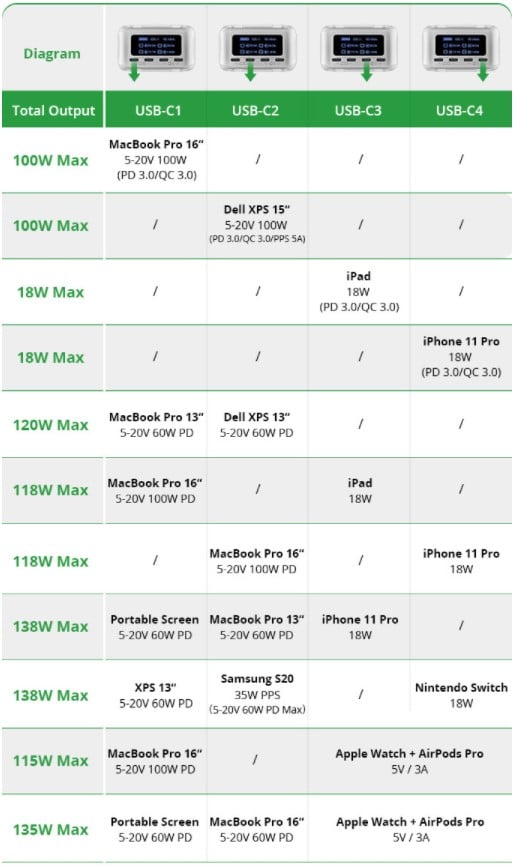 If you haven’t managed to upgrade all your cables to USB-C yet, it also comes with a USB-A to USB-C converter, although this will also impact how fast it recharges devices. What I’m trying to say is if you need to charge or power something, you’re probably set with this power bank. 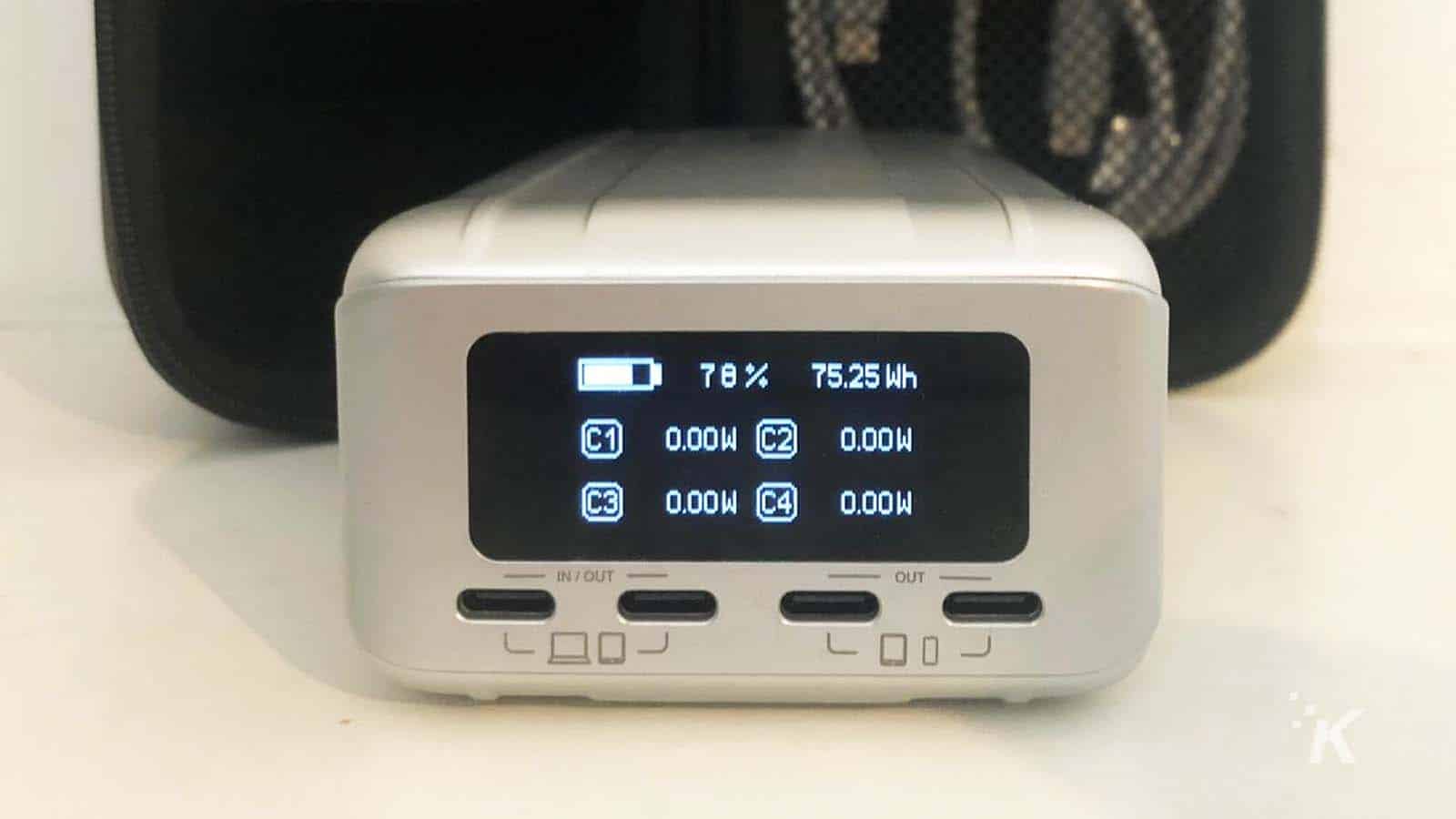 According to their Indiegogo, you should be able to update the firmware to ensure compatibility as newer devices are released. While this is an outstanding idea, in theory, I haven’t managed to find any way to do this. There’s no suite to download or install, and I didn’t get a notification to say the device had even been recognized – even though it still managed to charge through my desktop tower.

I don’t know if it’s because my  PC doesn’t have a USB-C connection, or if it’s because I already have the latest firmware, but it’s a feature that never worked for me either way.

Topping up the power 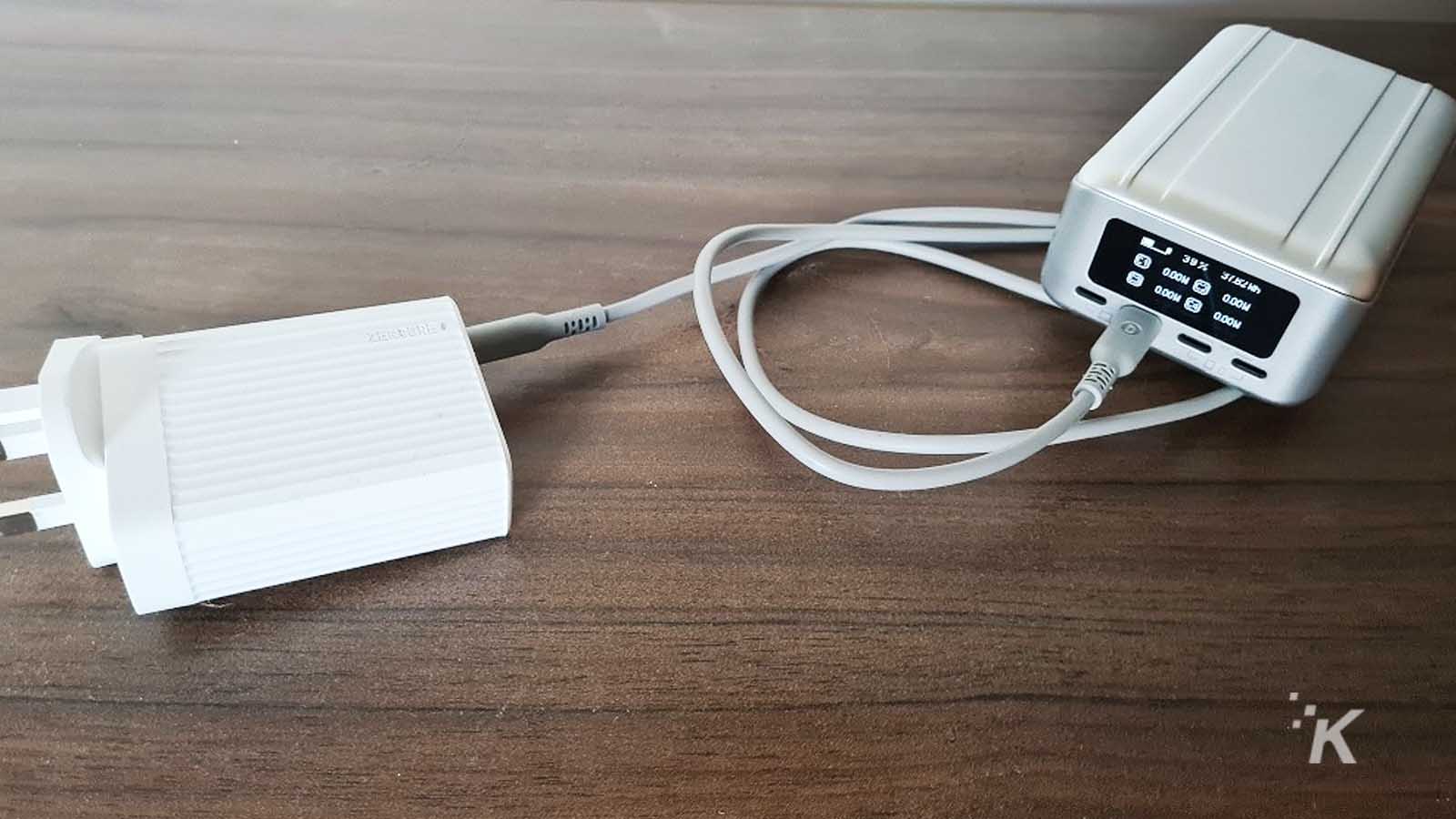 The SuperTank Pro would just be a half-way decent power bank if it wasn’t for the SuperPort S4 charger. It impresses with a trio of built-in USB-C ports (two of which use high output, the other using regular output), and a USB-A port. The compact iMac-inspired form comes with three plug converters – UK, US, and Aus – so you can use it all around the world. It’ll charge your SuperTank Pro in a little over an hour, which means you’ll be back up and running in very little time.

You can use this to simultaneously charge your SuperTank and any other devices which may need topping up, so it’s ideal for use in any stationary office setups or for taking on vacation.

One small thing I did notice, and something which is a minor worry; whenever I had the SuperPort plugged into any of my sockets, it started to emit a constant high-pitched whining sound after around 20 minutes. It’s not restricted to specific sockets, either. I tried it in a few spots at home and it happens everywhere I tested it.

I’ve not had any issues with it overheating, shorting my electricity, or causing problems with other circuits, but it’s still something to bear in mind. Something incredibly distracting and annoying.

Honestly, I was massively surprised by this power bank. I was expecting Zendure’s claims to be overblown, giving me one or two charges, max. I managed to get four full charges of my Samsung S20 from it with a little bit of power left over. I’ve used it to keep my Series X controller topped up when I can’t be bothered getting off the couch. My partner has used it to keep her iPhone X and iPad Mini full of battery on a day-to-day basis. And you can do all these devices at the same time!

I think that’s really where the genius of Zendure’s SuperTank Pro lies. Yeah, you could take it for a weekend away and keep your Macbook going without much trouble, but how often are you going to be somewhere with no sockets for that long? By topping it up around the home and using it to charge everything, rather than one big thing, it helps me to consistently streamline my laziness productivity.

At $249, I’m not sure I’d be able to recommend it if it’s going to be exclusively used at home. However, if you work away a lot, or take a lot of tech with you on a day-to-day basis, it could be an indispensable piece of kit. From your phone to a laptop, or even your digital camera, it’s a great way to keep you going through the longest of workdays.

The SuperPort 4 is a great addition

Includes a USB-A to USB-C converter

Takes forever to charge without SuperPort 4

No clear way to update firmware

Cabin quality is pretty impressive and though the plastics don’t fairly give the premium really feel like the Jetta or Laura, there’s hardwearing really feel to the insides. artificial intelligence deutschland Science, arithmetic, expertise, and engineering are not cool subjects, in keeping with at the moment’s college students. Physics college students, like Jonathan Hayman, look […]

How To Make Science, Technology, Engineering, And Mathematics Cool At School

Bodily sciences diploma packages are generally structured to provide flexibility for college students desirous to give attention to a particular field inside bodily science. artificial intelligence pros and cons quora Science of Mind reflects the instructing of Dr. Ernest Holmes, in the first half of the twentieth Century. Dying, to the provoke, is a science […]